How we try to answer the question ‘How clean is that drinking water?’

A central concern of the RECIRCULATE Water for Sanitation and Health Work Package (WP2) is how best to reduce faecal contamination of drinking water. To determine whether water is contaminated, Research and Technical Officers from the Water Research Institute (CSIR-WRI), which is part of Ghana’s Council for Scientific and Industrial Research, conduct tests of the water routinely as part of an extensively managed strategy.

A focus on uncontrolled faecal waste was derived from our scoping study which showed that it was the most problematic form of contamination and impacted human health. The initial study also informed us that there are at least four different sources of water that people access, including water from the municipality, boreholes and ‘sachet water’. This meant that we needed to measure faecal coliforms not just in municipal water, but in the other types of water too. We also explored where contamination of the water was happening during the scoping study and found that the municipal water was relatively safe until it reached the community where it was getting contaminated. 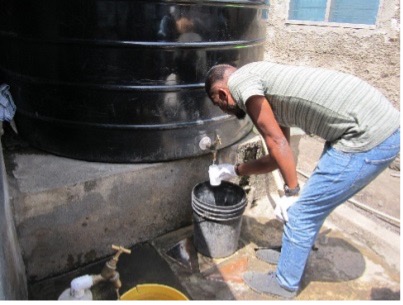 Collecting a water sample from a polytank.

In September 2020, baseline samples of the water quality were taken from the two communities which were carefully chosen based on a number of parameters. The baseline assessment , called a major campaign involved a phase of representative sampling, immediately followed by detailed sampling. For the representative sampling the quality of the water was tested at all the water points across each of the settlements. A sub-set of these water points, specifically the water points that were used by the most people, were selected for the detailed sampling, along with a proportion of households that used each of the selected water points.

This sampling has been repeated at pre-described intervals throughout the project. As of January 2022, two major sampling campaigns have been conducted. A third and final major sampling campaign is scheduled for February/March 2022. These are complemented with two intermediate campaigns which involve the detailed sampling process. By periodically testing the quality of the water we hope to see whether the interventions that we have been piloting in the study area have impacted on the quality of the drinking water. 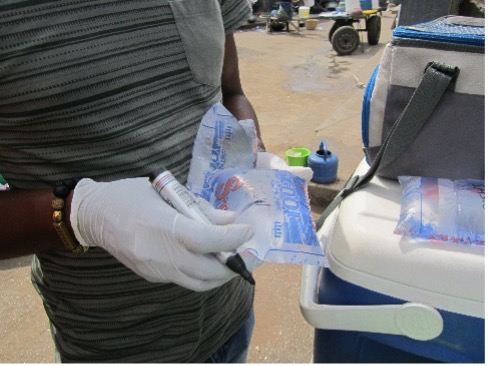 Taking a sample of sachet water.

Analysis of these water samples is performed at CSIR-WRI’s laboratory. The analysis includes testing for indicators of faecal pollution among others. Through this process, we can begin to answer the question of ‘How clean is that drinking water?’